It was an extremely busy week on Wall Street.  The election results were top of mind for investors, and given the current expected outcome gave investors reason to buy risk assets.  The Federal Reserve Open Market Committee also met last week, leaving rates unchanged.  Economic data for the week continued to send mixed messages but showed surprising strength in the labor market.

The S&P 500 gained 7.3% getting back the 5.6% it lost in the prior week for the week.  The NASDAQ soared 9% while the Dow and Russell 2000 each added 6.9%.  US Treasury yields inched a bit higher, with the 2-year note yield increasing one basis point to close at 0.16% and the 10-year bond yield rising by four basis points to close at 0.82%.  Gold gained just over 2% or $42.60 to close at $19,512 an Oz.  Oil prices also bounced back during the week on news that OPEC may prolong production cuts.  WTI increased 4% to close at $37.14 a barrel.  We had some slight changes to our Blackrock models, where we reduced exposure in US government fixed income and increased exposure to equities. 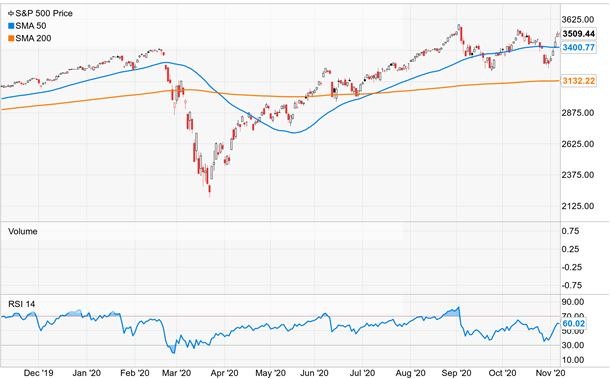 A best-case scenario seemingly played out in the US elections where Congress remains divided.  The realization that a huge stimulus plan was now unlikely coupled with the likelihood that tax policy would not regress and that healthcare reforms would be measured helped spur buying.  The perceived stalemate offered Wall Street predictability and gave investors reason to buy what has been working in the market so far this year, namely, large-cap growth companies centered in the technology sector.  However, it appears President Trump will contest the election, and it is still a very close call concerning the Senate- two Senate seats in Georgia will go to a runoff in early January and could alter the current Republican majority.  Of note, Senate Majority Leader McConnell said he would like to get some lite version of stimulus passed before the end of the year. Still, with President Trump contesting the election results, this may be unlikely and could put pressure on certain parts of the market in the near term.

The Federal Reserve, Open Market Committee meeting offered very little in new news.  The Fed kept their policy rate range at 0-0.25%.  Fed President J Powell also said that the current rate of asset purchases was appropriate but left the door open to increase purchases.  It is likely that without a stimulus packaged that the Fed will need to increase their purchases but will likely wait and hope that Congress can get something put together and passed in the next few weeks.

October ISM Manufacturing was better than expected, accelerating to 59.3 versus expectations of 55.7 and the September reading of 55.4.  ISM Non-Manufacturing was a bit of a disappointment coming in at 56.6 versus the consensus estimate of 57.3 and the prior reading of 57.8.  Initial claims were a little higher than expected at 750k, but Continuing Claims trended lower to 7.285 million.  The October Employment situation report showed an increase of 683k Non-farm payrolls well above the expected 570K.  Additionally, the report showed Non-farm Private Payrolls increased by a whopping 906K versus expectations of 650k.  The report also showed the unemployment rate falling to 6.9% versus the prior reading of 7.9%.