US equity markets hit another set of all-time highs last week.  Positive price momentum carried over from a strong November into the start of December, and more positive news on Covid-19 vaccines coupled with the rhetoric around a bipartisan stimulus package aided the weekly gains. 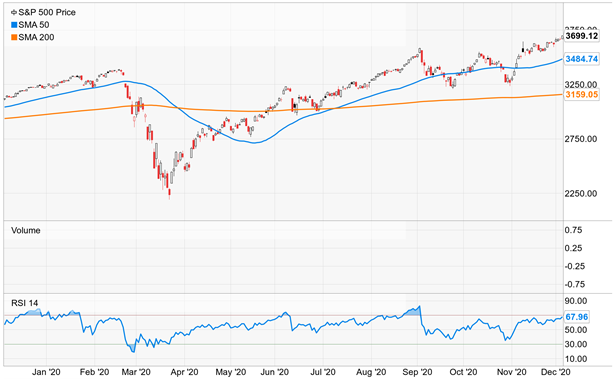 Wall Street had an impressive rally last week, with most sectors of the market participating.  Value and growth equities both did well.  Standout sectors included Software and Semiconductors.  In Software, Salesforce.com formally announced that it would take-out Slack, and Docusign and Snowflake’s earnings were better than expected. Semi’s continued to be red hot, posting 50.5% gains since the end of 2019.  Sixteen components of the Philly Semiconductor index were at all-time highs on Friday.  The performance comes as the Semiconductor industry association saw 6% year over year growth in October sales.

The positive news continued to roll-out on Covid-19 vaccines.  Early in the week, Moderna announced an efficacy rate of just over 94%.  Additionally, Pfizer and BioNTech received emergency use approval in the UK.  Later in the week, Pfizer announced that there had been some troubles in their supply chain and tempered their expected manufacturing expectations for their vaccine by 50%.

Stimulus related headlines reappeared during the week.  A watered-down version that would slate $908 billion found some bipartisan support but received a cold shoulder from the administration. Bernie Sanders also said he wanted more from the proposed bill and would want an additional set of $1200 checks to go out to US households.  The news headlines gave the market some footing and induced some anxiety in longer-dated treasuries that sold off on the prospects of a better economy and more fiscal spending.  The push for more stimulus might have a chance after Washington saw a big miss in the Employment situation report.  Non-farm payrolls increased by 245k, much less than the 650k that was expected.  The report clearly showed a slowdown in hiring in November and also showed increased permeant jobless statistics.  On the bright side, the unemployment rate fell to 6.7% in November from 6.9% in October.